Tweet Follow @twitterapi
Less More
5 months 1 week ago - 5 months 1 week ago #1 by Terry
1/20 Ebbro Lotus 72C Rob Walker Racing - US GP 1970 was created by Terry
Hi KM'ers
I started this kit about 4 or 5 years ago gluing about 4 pieces together and cutting some parts off sprues and quietly lost interest in it. Not entirely sure why but possibly because it was a bit simplistic. The kit was not of any real value to sell in started condition and I wanted a quick car build inside 2 weeks, so got stuck in, happily finishing inside 2 weeks as well. The kit is mostly ootb with the exception of aftermarket seatbelts, the addition of two oil tank lines, fuel lines to the injectors, spark plug wires, some dash and battery wiring, and a gear lever linkage in the cockpit. All easy stuff to give it a bit of visual interest.

Only notable mistake in the kit instructions were the colour callout for the wheels for the US GP was wrong, (the kit came with chrome wheels) so I did my own version of what I believe were anodised black rims from colour photo references. The kit itself was mostly ok to build, but there is a fair amount of slop and play in the rear suspension which makes getting everything lined up and straight and true to be somewhat stimulating.

Car is painted in Tamiya TS55 dark blue (not the TS51 racing blue in the kit instructions which is way too light imo) decanted and airbrushed. The finish you see is straight off the gun, no polishing, no clear coat.... just like it was in 1970

My only real bone of contention were the kit decals (unbranded) which were stiff as new leather. Quite possibly the worst decals I've ever had in a kit. No setting solution made so much as a dent in them, and some horrifying sessions with the hair dryer where the threat of warping plastic parts had me in a cold sweat right up to the end.

In summary while it feels good to finish shelf queen, I can't say it was an engaging build. 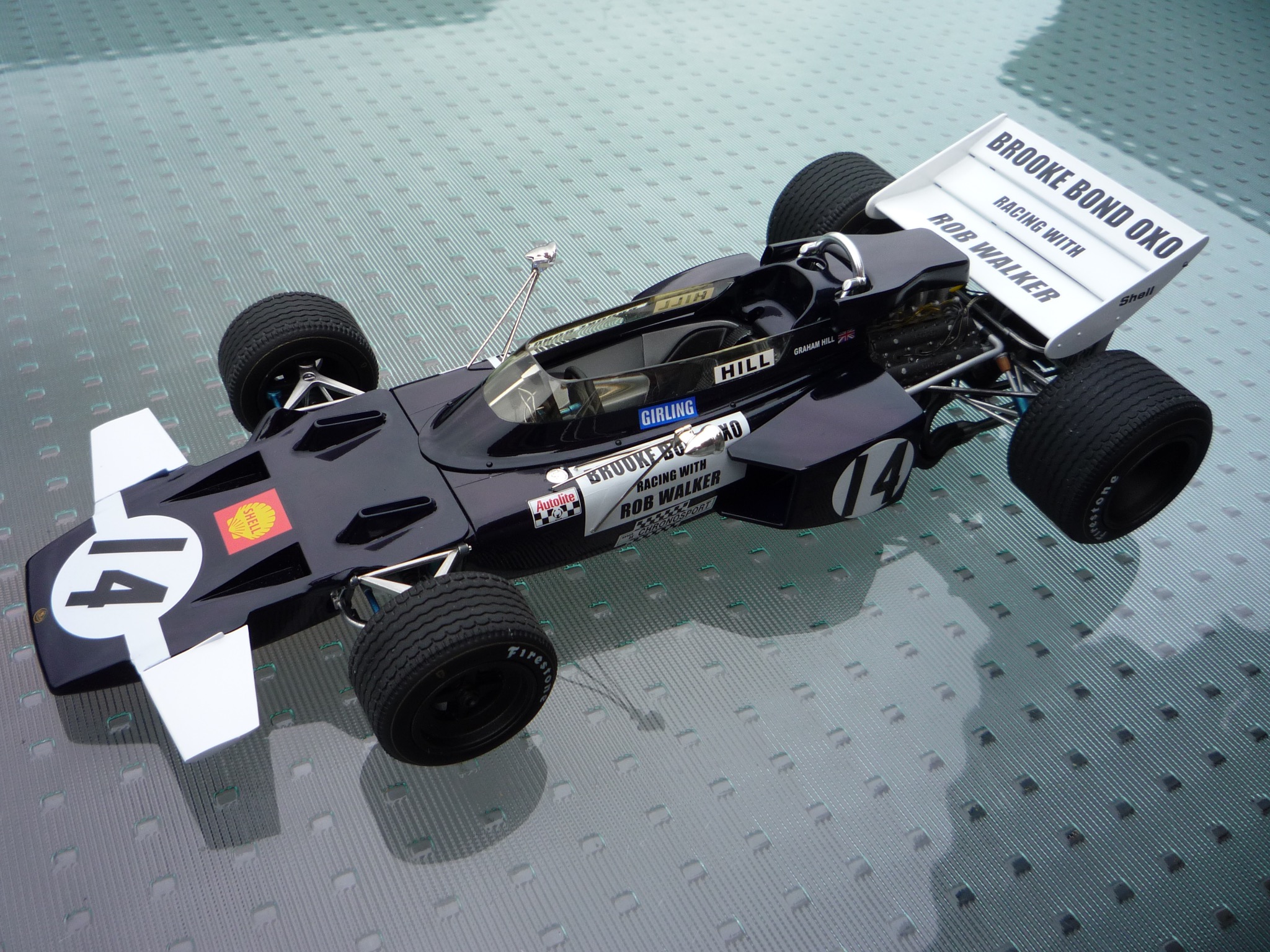 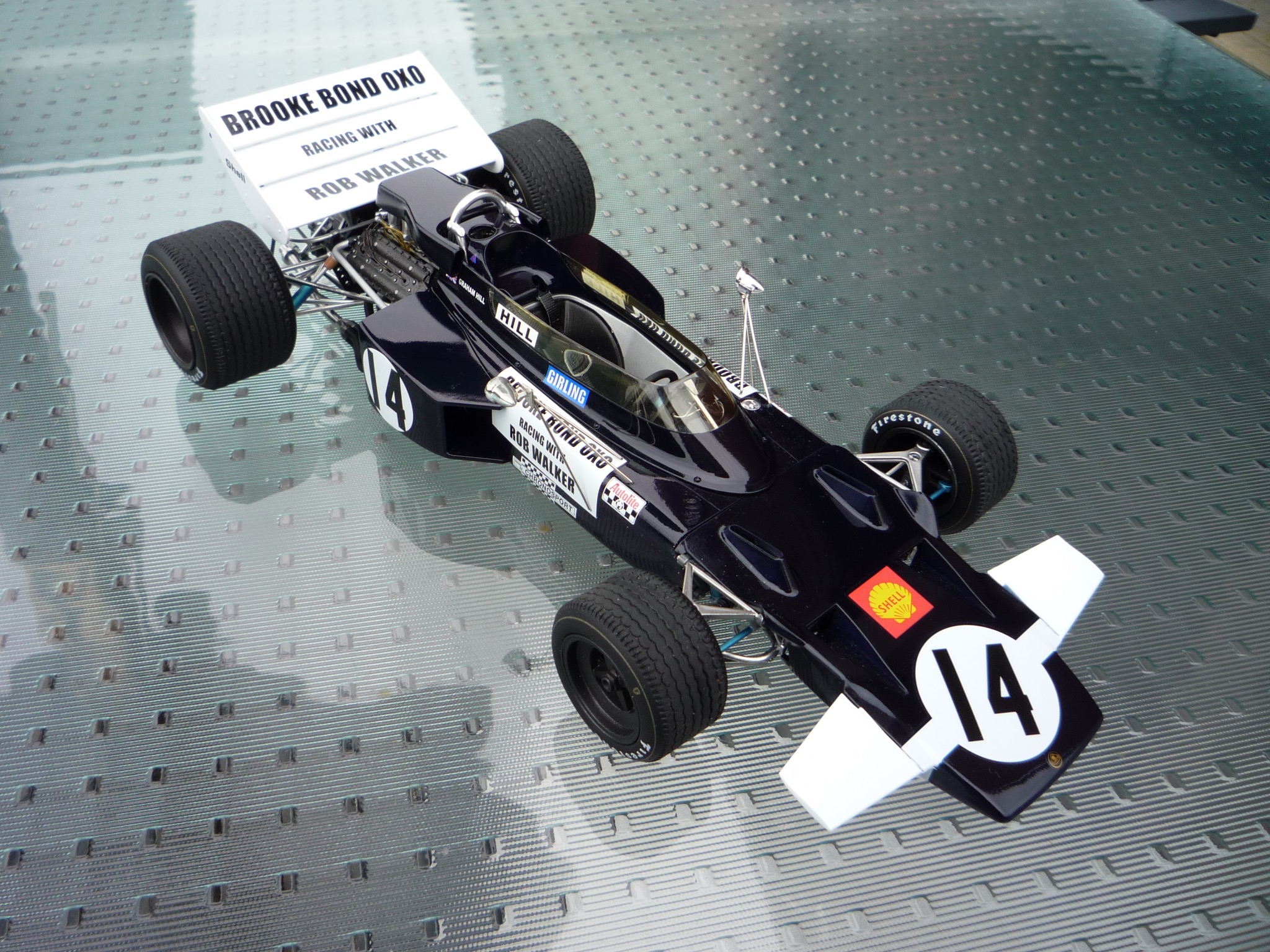 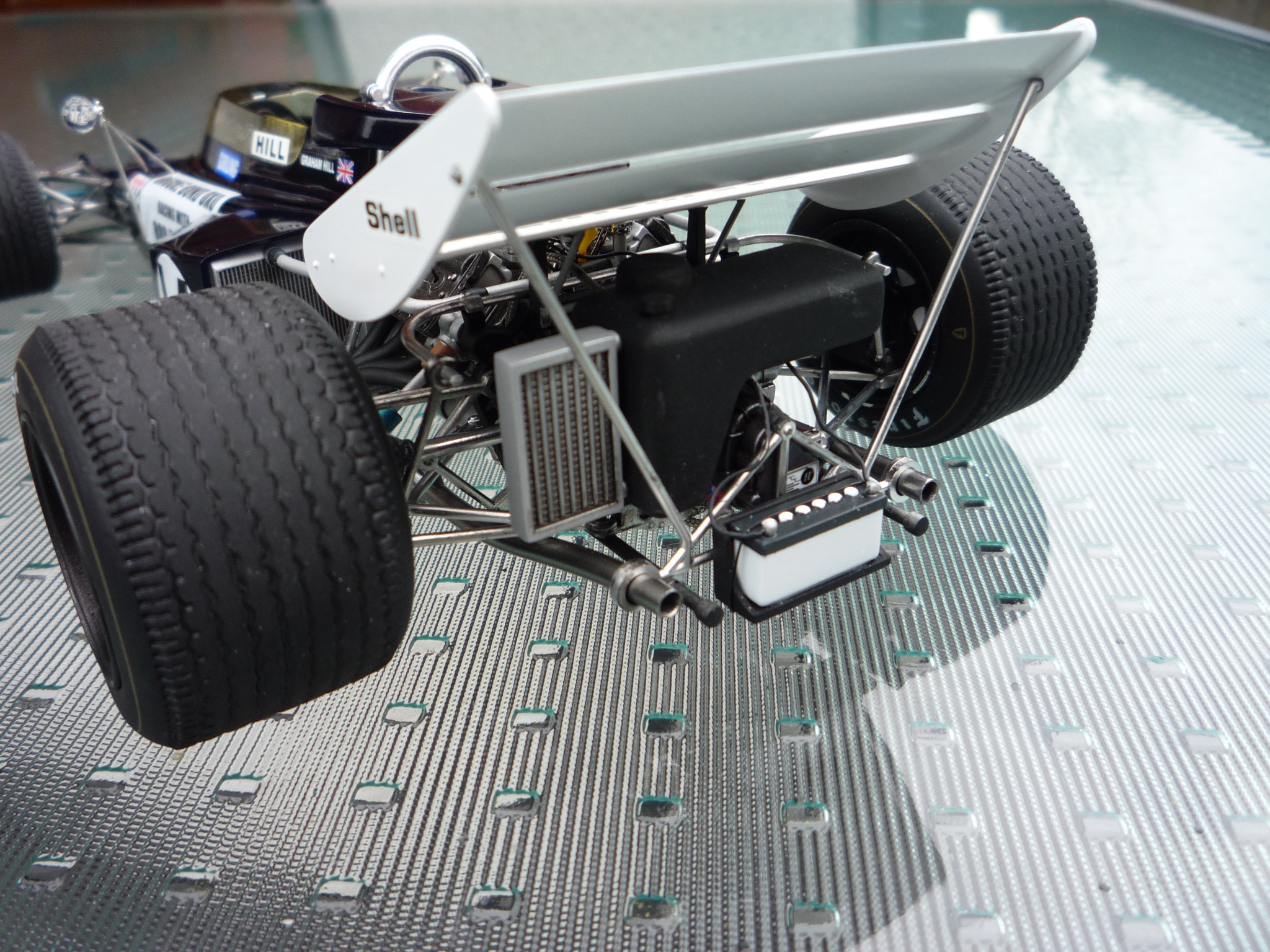 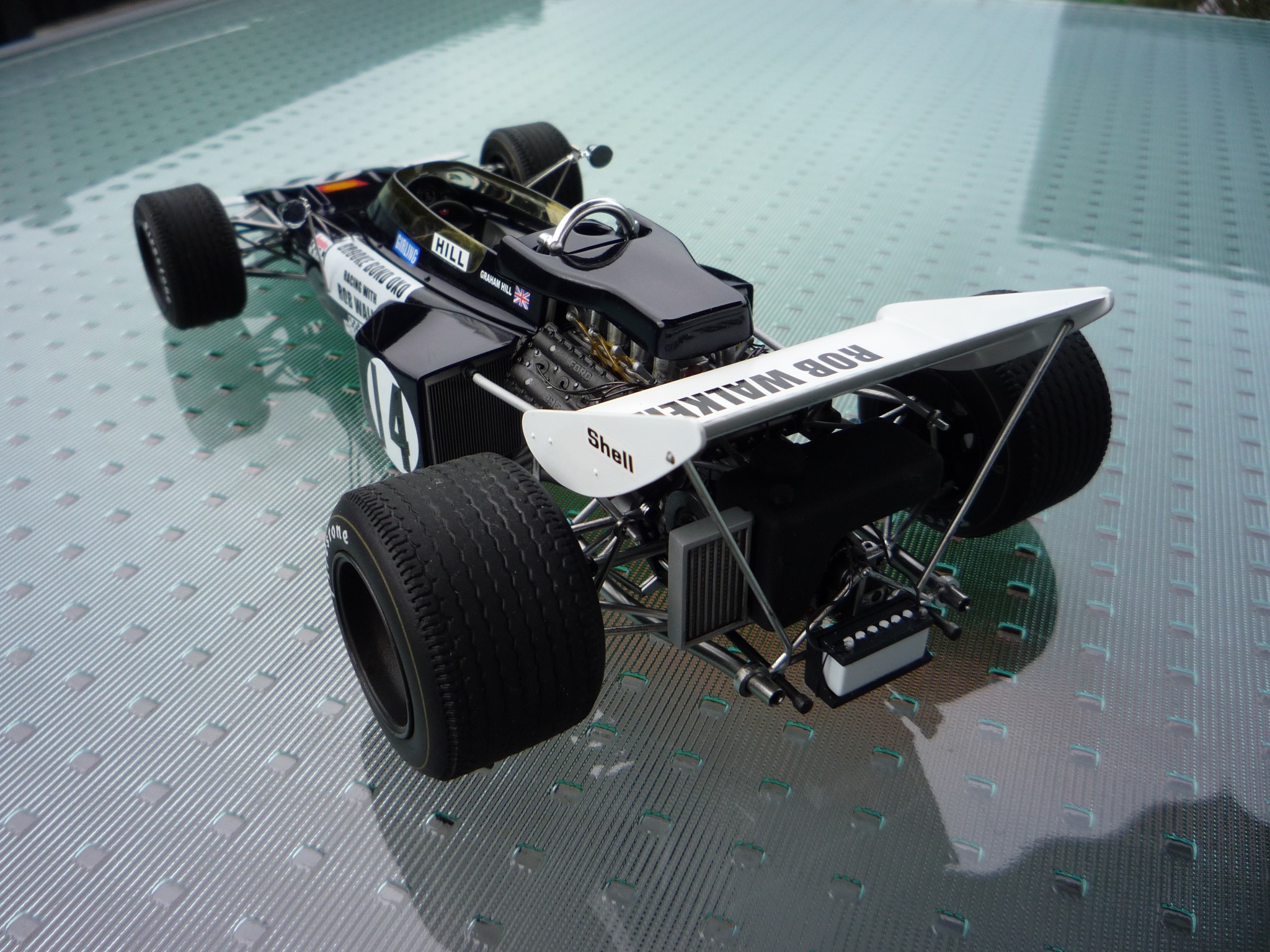 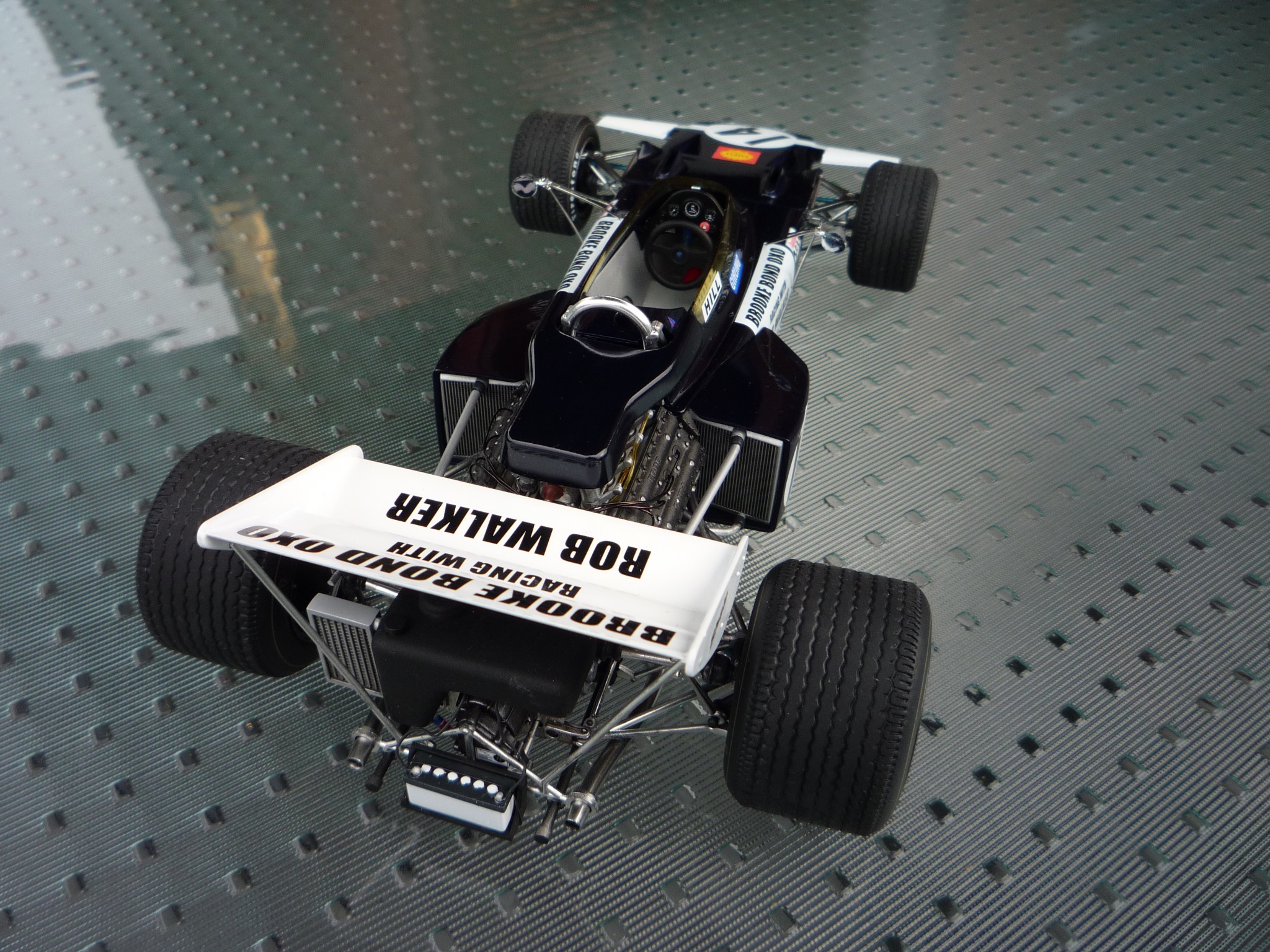 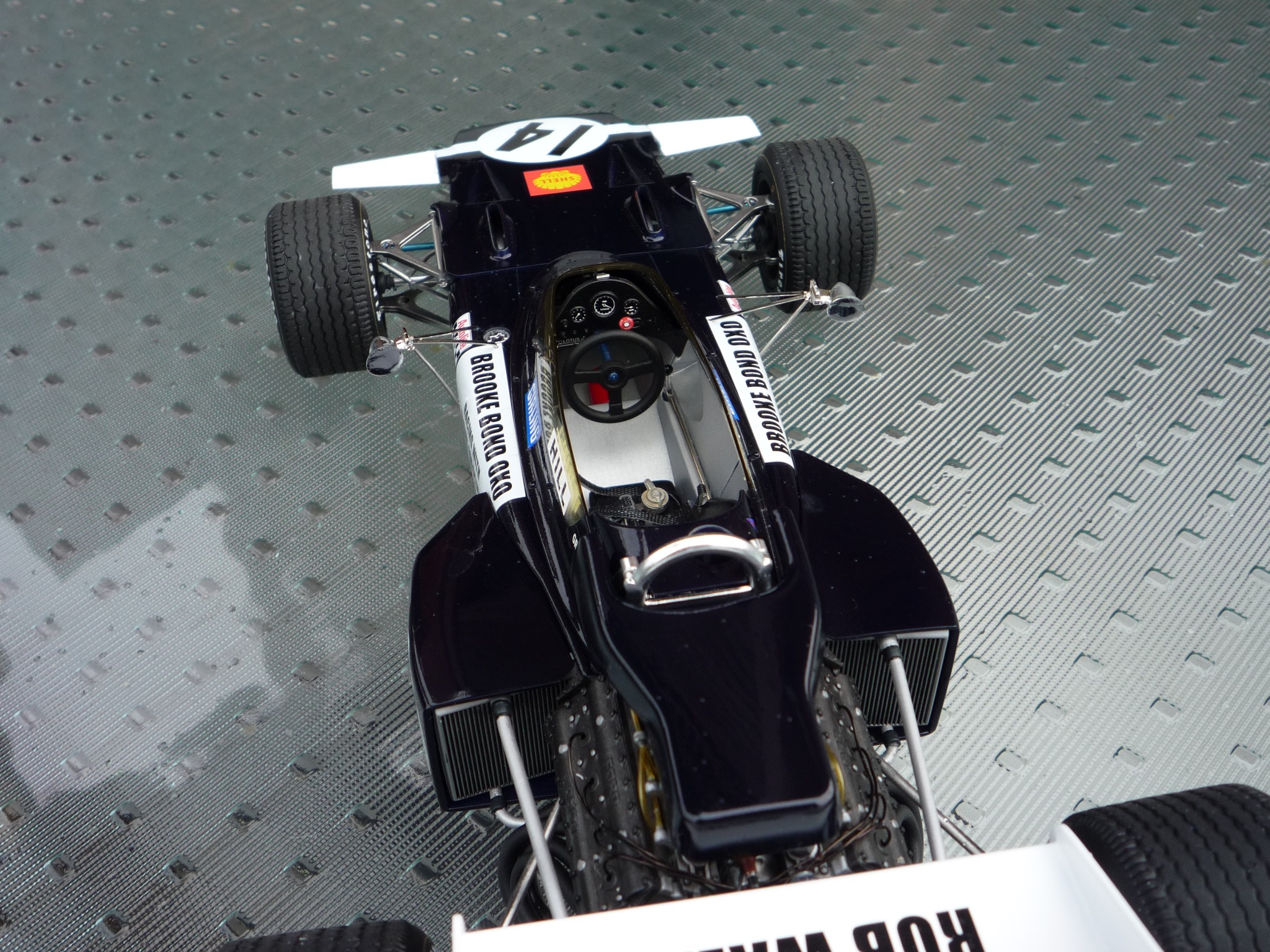 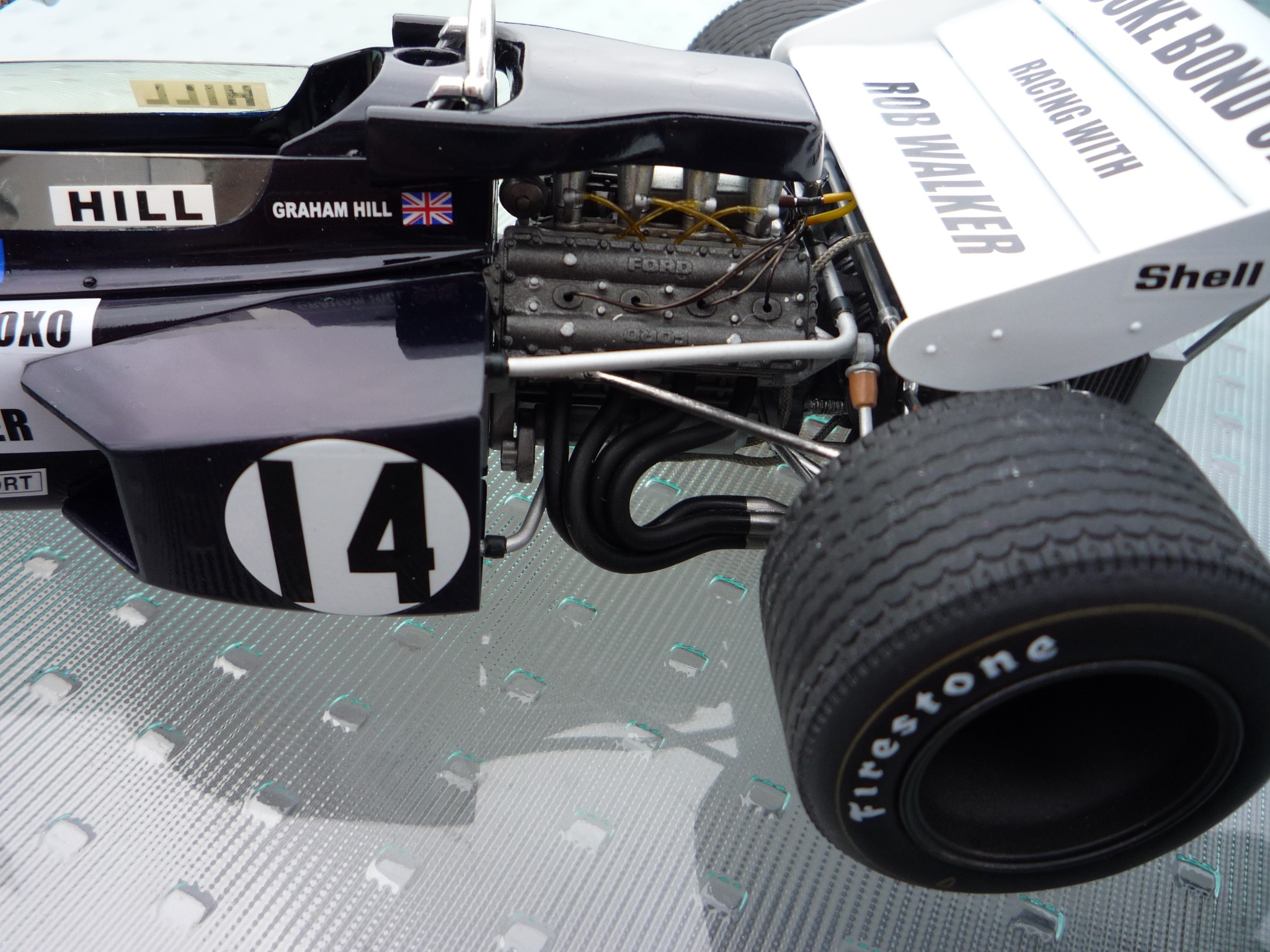 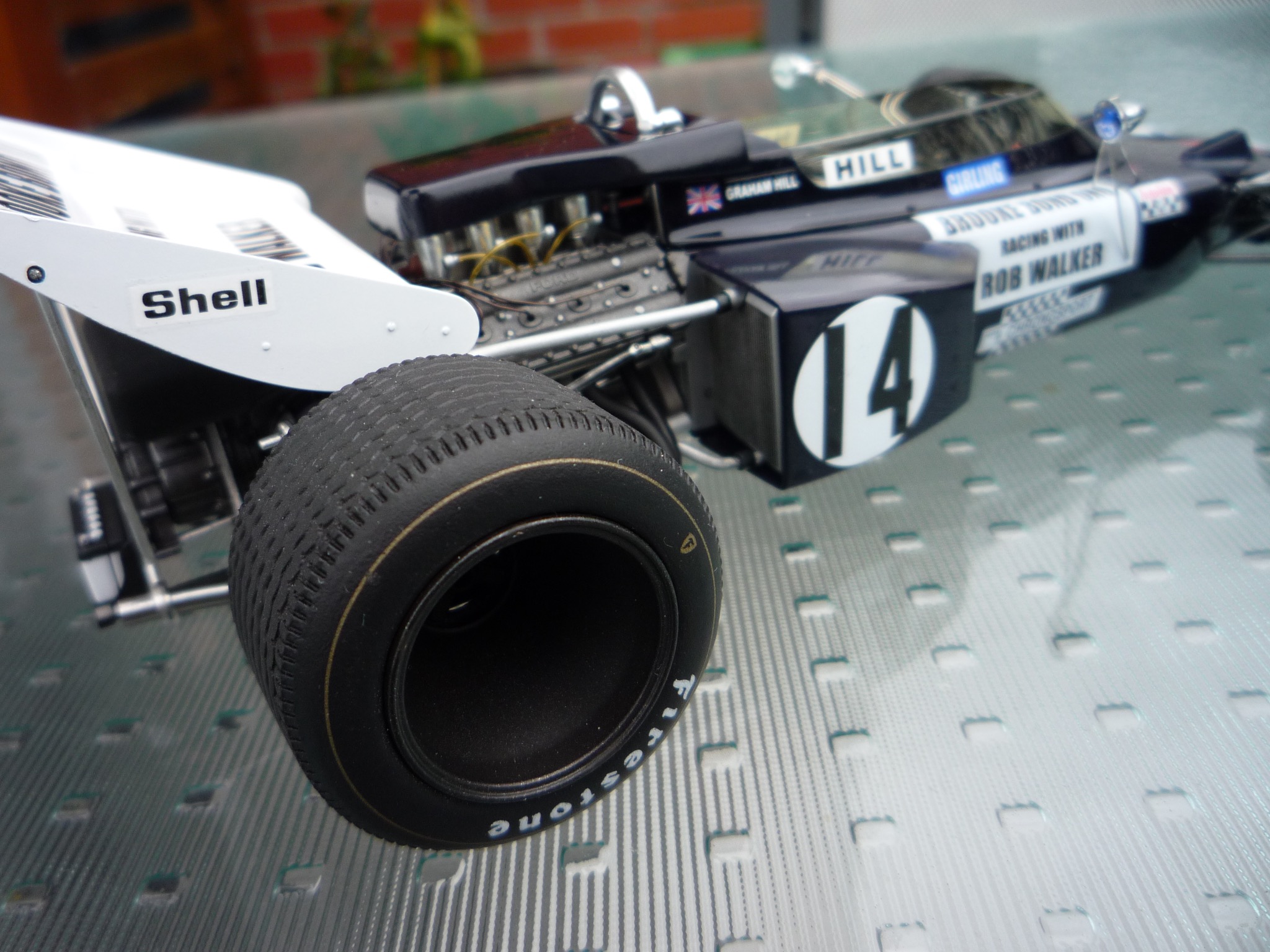 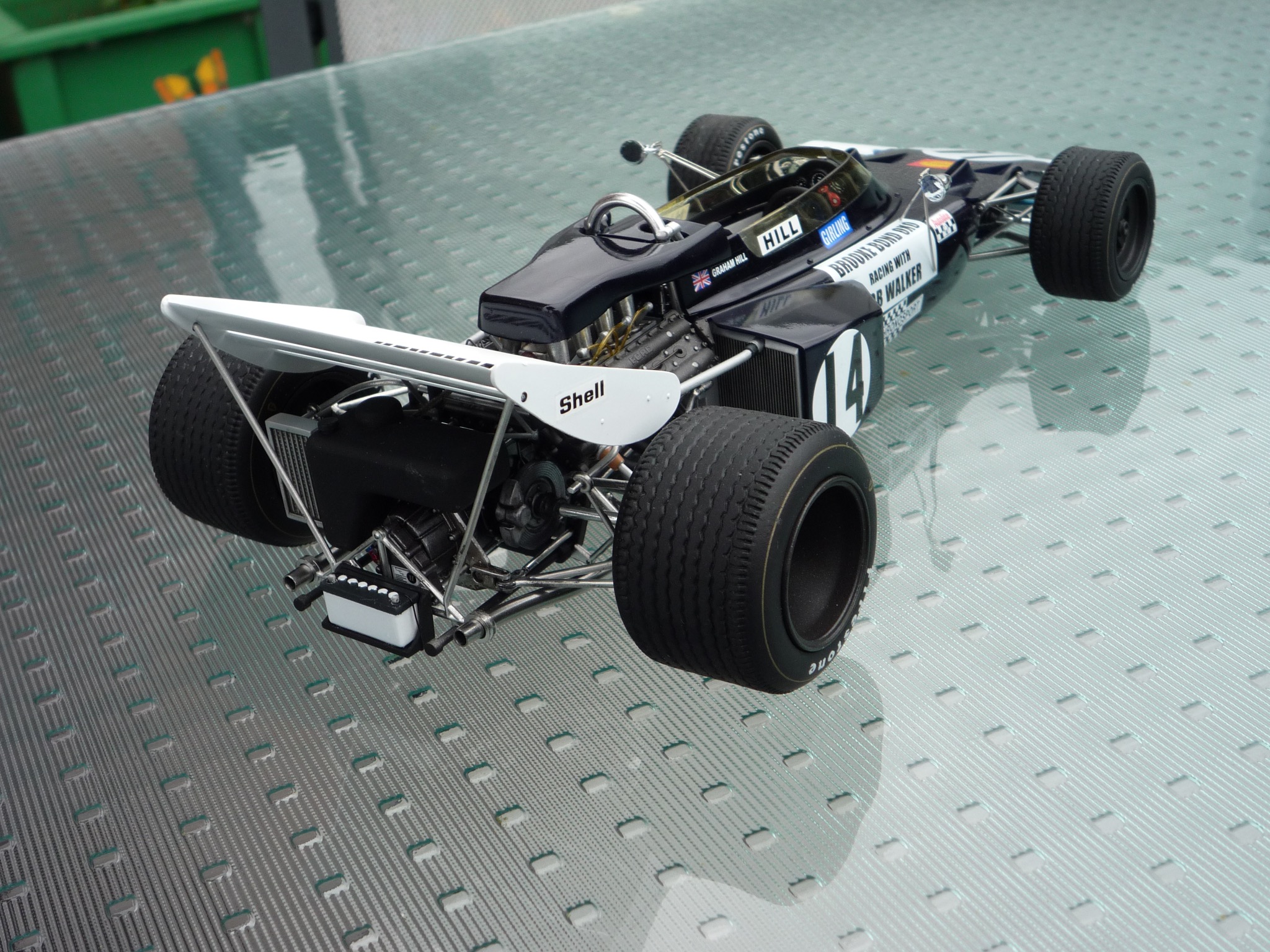 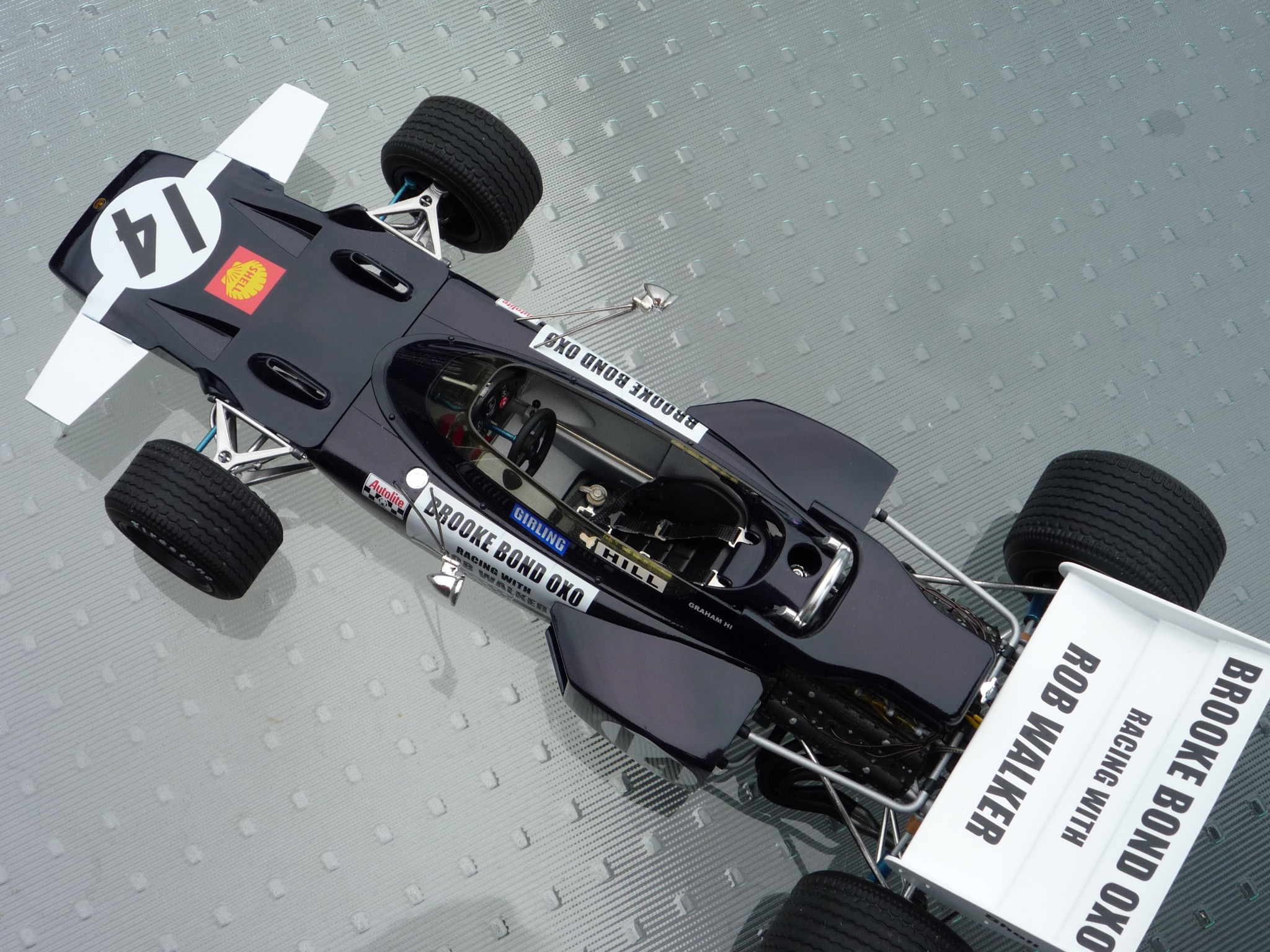 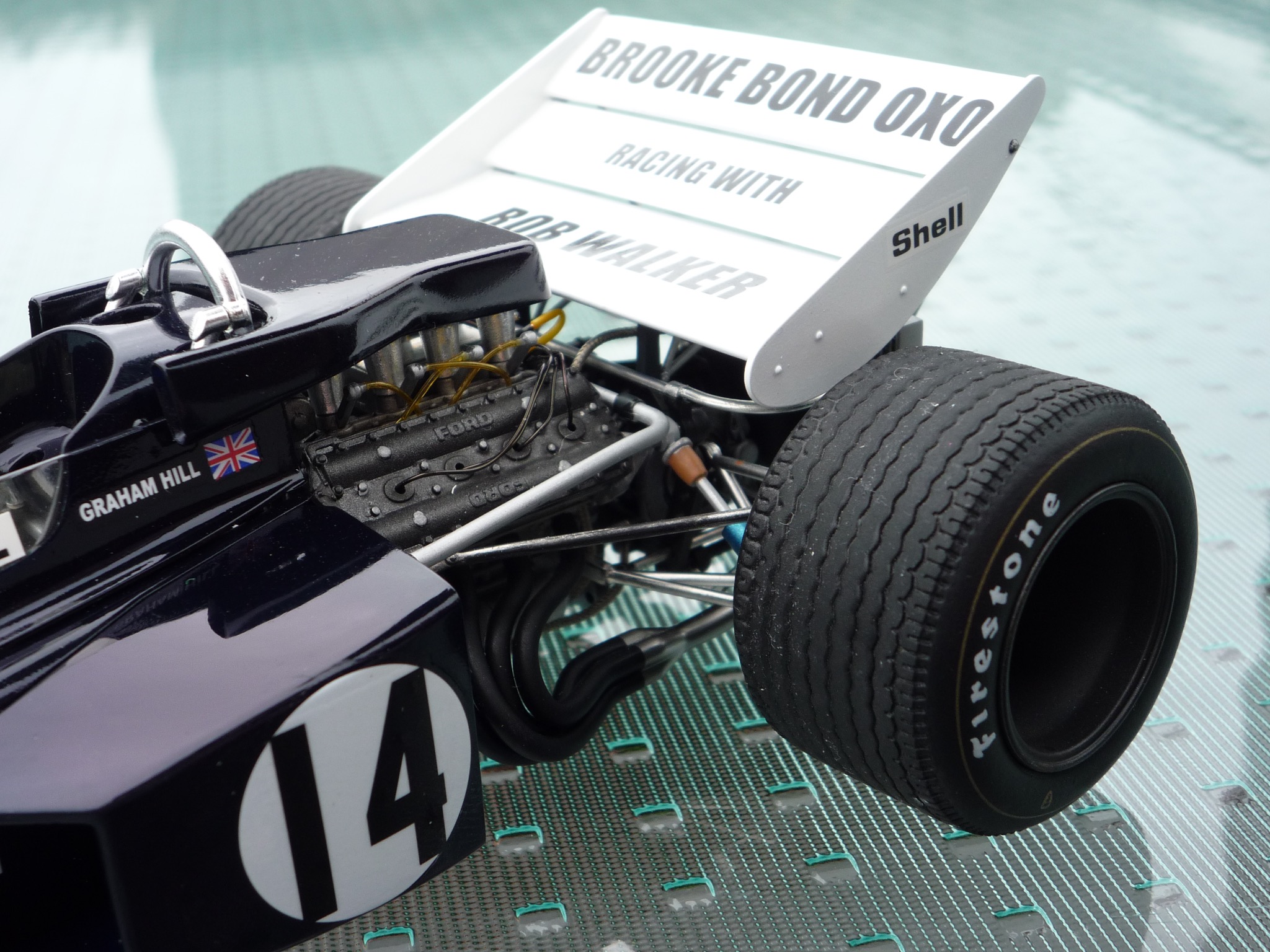 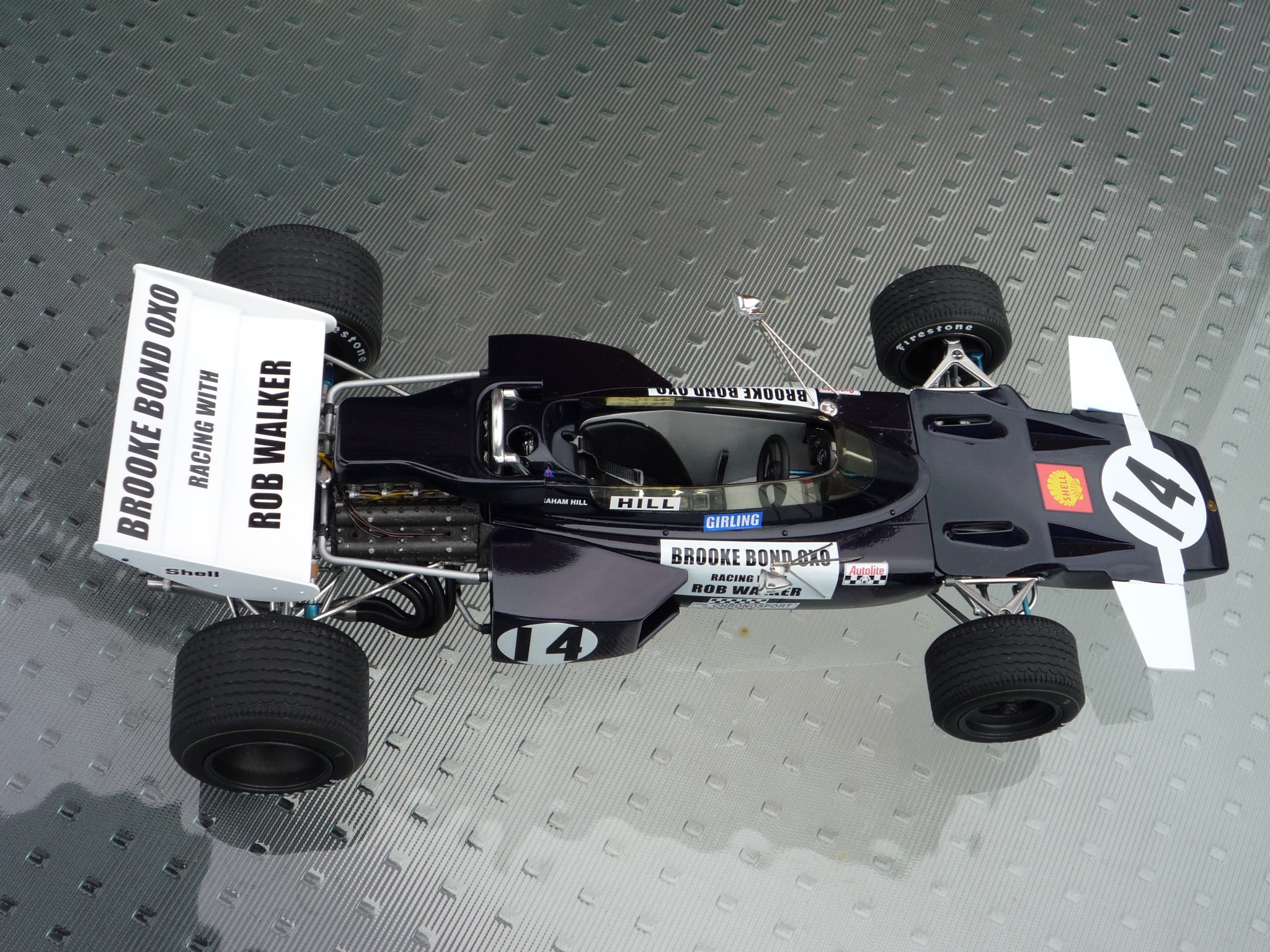 Less More
5 months 1 week ago #3 by Viperbuilder
Replied by Viperbuilder on topic 1/20 Ebbro Lotus 72C Rob Walker Racing - US GP 1970
Looks pretty damn good for a quick build Terry. The paintwork looks so smooth. You would have to be happy the build.
On the bench:
Revell 1-72 Hunter FGA.9